Our iLASIK team is composed of the most experienced, highest awarded surgeons in the central Texas area.

Dr. Tom Walters is the most experienced eye surgeon in central Texas, specializing in cataract, iLASIK, and refractive lens implant surgery for vision without glasses from near to far. Austin-area doctors and their patients choose Dr. Walters as their consulting surgeon more often than any other, benefiting from his unmatched expertise of having performed more than 35,000 surgical procedures. As a Board Certified Ophthalmologist, Dr Walters is repeatedly recognized with awards including one of America’s Top Ophthalmologists by the Consumers’ Research Council and the Guide to America’s Top Ophthalmologists, one of the Top Refractive Eye Surgeons by the Austin Business Journal, and a Texas Super Doctor by Texas Monthly Magazine

As an internationally recognized expert in the field of cataract and refractive surgery, Dr. Walters is an active leader in developing new advancements in ophthalmic technology. With a dedication to the highest-quality surgical results, Dr. Walters offers the iLASIK Technology Suite for his LASIK patients, the exclusive combination of Intralase and Advanced CustomVue technologies. This all-laser LASIK system provides Dr. Walters’ patients the safest and most technologically advanced corneal refractive surgery in the world. As Austin’s most experienced cataract and implant surgeon, Dr. Walters has been selected by Premier Surgeon publication as a leading innovator in the field of cataract and intraocular lens implant surgery.

Trusted more often than any other to lead the development and advancement of ophthalmic science, Dr. Walters has served as principal investigator for over 200 FDA-approved research studies. His dedication to excellence contributes to the continued development of advanced surgical techniques in cataract and lens surgery with new technology, astigmatism correcting and multifocal lens implants, LASIK and ophthalmic pharmaceuticals. These advanced innovations are used to better treat eye conditions including cataracts, near and far sightedness, astigmatism, or just problems reading without glasses.

With a reputation earned for achieving outstanding surgical results, Dr. Walters is often chosen to launch new ophthalmic technologies and to mentor eye doctors regarding the application of new surgical techniques, devices and pharmaceuticals. Dr. Walters was the first doctor in Texas to implant the FDA-approved ReSTOR® multifocal lens implant, enabling cataract and refractive lens patients to be glasses free for both near and far vision. Dr. Walters continues to play an active role of instructing and mentoring other ophthalmologists in the application of new ophthalmic innovations and holds consulting and advisory positions with global ophthalmic companies. Dr. Walters is President of Texan Eye PA, a fellow of the American Academy of Ophthalmology, and a member of the American Board of Ophthalmology.

Dr. Steven J. Dell has earned a reputation as an internationally recognized leader in the field of Refractive and Cataract Surgery. Dr. Dell serves as the Chief Medical Editor of the journal Advanced Ocular Care and he is President-elect of The American College of Ophthalmic Surgery. He has twice been elected one of the Top Fifty Opinion Leaders in the field of Cataract and Refractive Surgery by the worldwide physician readership of the medical journal Cataract and Refractive Surgery Today. He has also been honored by the medical journalPremier Surgeon as one of the country’s leading innovators in the field of Cataract and Intraocular Lens Implant Surgery. He was recently named one of twenty-one of the Best Ophthalmologists in the US by Becker’s ASC Review.

As Medical Director of Dell Laser Consultants in Austin, Dr. Dell has performed more than 20,000 surgical procedures. More Central Texas and Austin eye doctors have chosen Dr. Dell for their own eye surgery than any other surgeon. In 2008, Dr. Dell was named a Super Doctor by Texas Monthlymagazine for the fourth year in a row. He has also been named one of America’s Top Ophthalmologists by the Consumers’ Research Council of America, and one of Austin’s Best Doctors by Austin Monthly magazine.

Dr. Steven Dell is an award winning lecturer, textbook author, editor and a noted clinical researcher. In addition to personally training several Austin area eye surgeons, Dr. Dell has elected to share his expertise with other doctors by sponsoring popular externships and lecturing on the topics of refractive surgery and cataract surgery at ophthalmology meetings around the world. He has personally trained over 500 surgeons on his advanced surgical techniques.

Throughout his career, Dr. Steven J. Dell has conducted research on the latest advances in eye surgery, often serving as an investigator for studies sponsored by the FDA. In this role, Dr. Dell has been instrumental in bringing new technology to the United States. He continues to work closely with ophthalmic companies in the development of new products and instruments, and is himself the inventor of several innovative medical devices used by hundreds of LASIK and cataract surgeons.

Dr. Dell features only the most sophisticated technology in the world at his LASIK center in Austin. His consulting partnerships with leading ophthalmic companies allow him to utilize multiple laser systems to achieve the best results with LASIK and ASA eye surgeries. 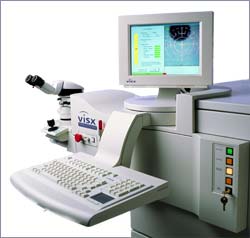 Using the STAR S4 IR™ Excimer Laser System, surgeons can deliver the broadest range of wavefront-guided laser vision correction treatments to patients. In fact, more than 94 percent of eligible candidates in the U.S., and more than 99.75 percent outside the U.S., may potentially benefit from the Advanced CustomVue procedure.* 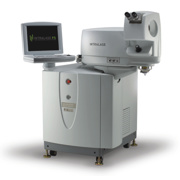